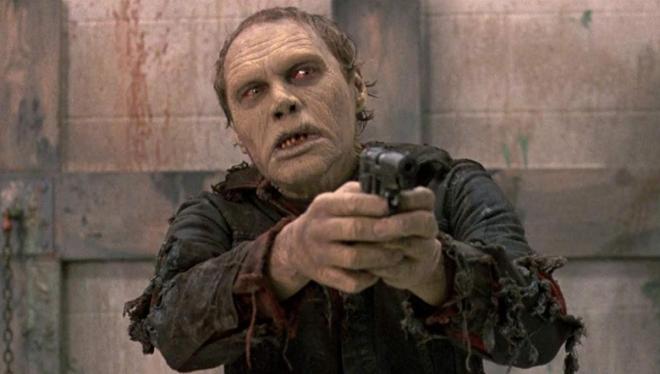 By 1985 the impact of Romero’s seminal movie, Night of the Living Dead  could be felt throughout the film industry from the use of non-voodoo hoards of zombies to the use of said films as heavy handed allegories for any topics d’jour. Romero’s 1978 Dawn of the Dead was about consumerism, and today’s final installment for Espantobre 2020, Day of the Dead  is about a fear of that which is seemingly far yet so close, it is about the cold war as it stood in Reagan’s america and about the loss of hope. The villains in today’s film, apart from zombies of course, are the ultra nationalist order following for the sake or order following ‘army men” using anger and force to take control over the well meaning scientists who are trying to find a solution to the plague ravaging the world. This movie is often criticized as being too bleak, which makes sense when you consider the ultra campy nature of other zombie movies of the time that followed a relatively formulaic narrative about a band of survivors. Day of the Dead takes place in a time after hope has been completely lost, the humans that we do see on screen represent what is left after the end which amounts to a few well meaning people and the over the top brutish assholes whose use of force allowed for survival. If this movie was remade in 2021 it would be seen as a far too heavy handed allegory for the anti science reaction to COVID-19 in American Society.

You can watch Day of the Dead on HBO Go

The final musical accompaniment for Epantobre 2020 is … La muerte chiquita by Café Tacvba. If you know a little French you know exactly what the little death is, and so we have it, we leave you with a wikipedia rabbit hole of your own to scurry down.

You can listen to the entire Espantobre 2020 Playlist, we encourage you to listen to it, dance to it, invite your friends to do the same –   Here