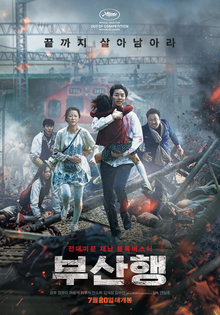 Train to Busan…is that the one where Steven Segal kills a dude with a rocket? Or is that the one where Captain America fights his way to the front and eats bugs? No, it is not. To be very very honest it took me a long time to be convinced to watch this movie, the little hipster that lives in my brain would not allow me to initially even consider watching something that is “oh so popular”. I would deflect, and “well actually” my way out of the situation and make glib remarks about the western fetishization of K-pop culture, I would say “well if you like zombie movies you should watch Return of the Living Dead II as it is a campy treasure”. And then it happened, a few weeks ago, during a reoccuring movie night hangout with some childhood friends this film found its way on to the list of films that we load into the randomized film chooser and BAM! I finally watched Train to Busan.

If you haven’t already guessed, today’s movie pick is 2016’s k-horror masterpiece Train to Busan. If you are like me and avoided watching this due to its sheer popularity, I encourage you to muzzle your wee hipster and just watch it. This film, like all zombie movies, and horror movies in general is a direct commentary on the culture of the people that produced it. This specific zombie movie is a commentary on grind/hussle culture in Korea and said culture’s impact on “the family” and the greater good it could also be viewed as a commentary on encroaching western cultural impact on Korea itself. All of the good guys are “family men” and the bad guys are either self centered zombies and or self centered shitty adherents to the hyper individualistic grind culture. In a way, this movie made in 2016 is a fantastic fit for 2020 COVID-19 America, it ham fistedly poses the statement – “it’s always the self centered asshole that gets us all killed infected isn’t it?”

You can watch Train to Busan on Netflix or Shudder for yourself and then call me up and we can chat about what YOU thought this movie was about.

Today’s song is Peace Train by Yusef/Cat Stevens , for further context, i was going to choose Daughter by Pearl Jam, but that seemed like a bit of a “hat on a hat”.

Keep up with the playlist as it builds Here