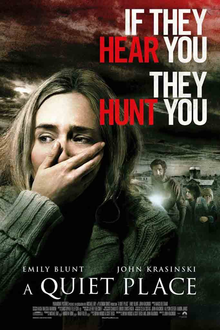 A few days ago writing a forward for the 1932 Weimar classic Vampyr by mentioning that horror films that are meant to act as a mirror of the society in which they are made. What happens when you live in a very bifurcated society and both sides have the propaganda resources to tell their tales and present their version of the mirror? We get horror films like 2018’s Jim from the office, vehicle, A Quiet Place.

In 2020 is there anything more disturbing than an allegory about a privileged white man who sees himself as a victim for being conservative? Well, that is exactly how I interpreted “A Quiet Place”. This film follows one family’s plight as they attempt to remain as silent as possible to avoid being killed by scary black and brown monsters who attack you just for speaking out or “making a noise”. When it boils down to it, this is a “father knows best” tale wrapped in various layers of allegory and white fragility packaged as a creature feature. Woah-is-me plot aside, this film manages to tell a story without much spoken dialogue and the audio engineering is something to be experienced.

You can watch “A Quiet Place” your self on Amazon Prime

Keep up with the playlist as it builds Here